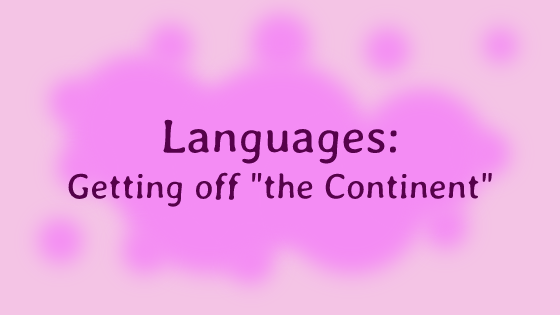 There are affiliate links in this post – if you click on them and go on to buy something I will earn a small commission at no additional cost to you. I only link to stuff I think is worth looking at!

It is easy to look at languages that aren’t European and think that they are too much – at least French has a lot of guessable words, Hindi doesn’t even have a guessable alphabet! Besides which, it is easy to feel as though European languages are superior in some way – cultured as opposed to cultural. I don’t blame anyone for that, we are taught very Westernised versions of world history and cultural history, but it isn’t true. I could say a lot about the richness of literatures and oral histories belonging to various languages, but it shouldn’t be the case that non-Europeans need to justify their languages as valuable. Learning languages is a nice, if incomplete, corrective for the feeling that they do. As soon as we engage with other languages seriously their value, to their native speakers and to ourselves, becomes self-evident. We can learn a lot more about the world if we listen to it – and if we provincialise Europe in the process.

My firm belief is that the apparent difficulty of non-European languages is irrelevant if you have engaging resources that make you want to decipher them. I admit that I plumped for Persian before Arabic because it was closer to what I knew. My plan used to be Hindi -> Persian -> Arabic -> Hebrew (I have since discovered Amharic!), straying out slowly into languages at a greater distance from my own, with some consideration for the number of speakers along the way. So I have some sympathy with trepidation in the face of the other, but I suggest you try to ignore it!

The first language I tried to learn independently was Hindi, which I believed to be pretty far away from English – as it turns out it is an Indo-European language with a decent number of English loanwords, but that is something I didn’t know when I started learning. A lot was new to me though, but as I was engaged with the language and I cared about it I knew I could have dealt with it being harder. I let myself progress slowly and filled my life with enjoyable Hindi content. I would have done the same with Tamil or Hausa. The alphabet and often unrecognisable vocabulary are enough to put most people off, if they were considering it in the first place. But I assure you that, if you are having fun and not berating yourself when you don’t understand, it is good even when you meet something hard. Side note: Hindi is the 4th most spoken language in the world, so it is surprising how few people do consider it, since numbers generally enter into the consideration at least for people early on in their language journey.

It is pretty exciting and delightfully useful that, once you have even a basic knowledge of one language outside of your own language family your transferable vocabulary, which you can use when picking up a third language, is usually widened dramatically. But you don’t need to do what I wanted to and follow the link languages! You are welcome to if it makes you comfortable, but you don’t need to. You will be surprised by cognates and loanwords almost anywhere you wander, and they don’t need to saturate a language for you to be perfectly capable of learning it – and you are capable! If you find a way of learning that you enjoy and is well-resourced, you are good to go and enjoy it. As I have said before, learning a language is hard work only insofar as you treat it as a stick to hit yourself with. You can become good at your target language, but remember that it is way more fun to be bad at a language than not to speak it at all, and way more useful. You don’t need to let the difficulty of a language put you off.

As a final point I will add that none of the above is intended to say that European languages don’t have important lives in non-Western countries – colonialism has left its mark, so speaking Spanish, English, French, Portuguese, Italian, German or Dutch (have I missed any?) can get you some distance away from “the Continent”. But it is good to look beyond them – the more voices you hear the better.

I don’t usually ask for comments, but I would be interested to know which languages you think are worth learning, and why. I am starting a master’s degree next week and, as a result, have begun a new round of dabbling in unfamiliar languages as a form of semi-productive procrastination. I could do with recommendations.

If you like what I’m doing with this blog, maybe you’d like to support me on Ko-fi? But maybe not, that’s OK too!